The Side Amphitheater is located in the historic district of the city next to the Museum of Archeology. The arena for gladiator fights with wild animals and thousands of spectator seats make a strong impression, taking us back to the distant past. 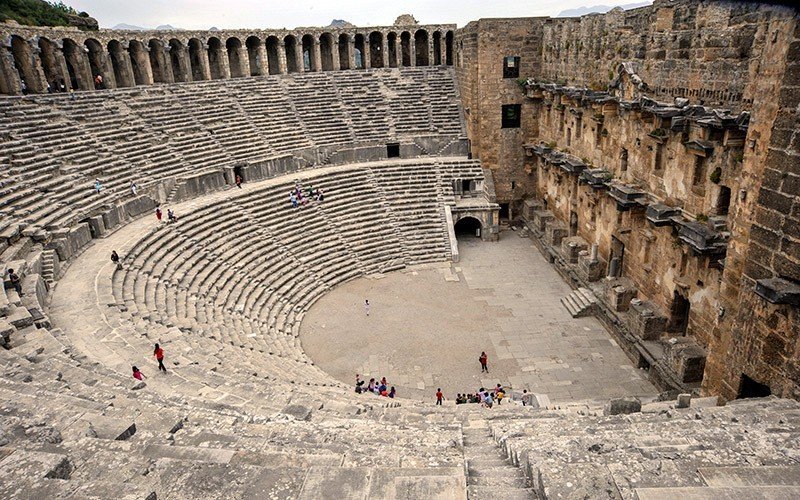 The amphitheater in Side was built in the 2nd century BC. Previously, it was a Hellenic theater, where 16 thousand spectators spent their leisure time, watching how real gladiators fight. They were loved, despised and feared at the same time. The bloody battles caused delight and admiration among the people of the main characters. Even the girls watched with interest the process of the battle. Not a single action-packed film with sophisticated special effects will be able to convey the powerful energy that was imbued with the atmosphere of the performance on stage.

Previously, the amphitheater in Side included huge stands on two floors. The first tier of stands, supported by powerful arches, has survived to this day. Now you can see 22 rows of surviving places smoothly passing to the central round platform, which is fenced off by a strong wall. The wall provided the safety of the spectators, protecting them from the attacks of wild animals. On the podium are the remains of statues and bas-reliefs. As well as traditional masks of the muses of tragedy and comedy (Melpomene and Thalia). One of them is crying, the other is laughing. All these things once adorned the arena. The top row offers a stunning panorama overlooking the sea and the old town of Side. This creates a clear idea of ​​what the resort was like tens of centuries ago.

For our guests, we have developed a thematic tour of Kursunlu Aspendos Side. On an excursion, you will see all the most interesting historical sights of the region and immerse yourself in the pristine beauty of the nature of these places. Read the details and book. It will be interesting!